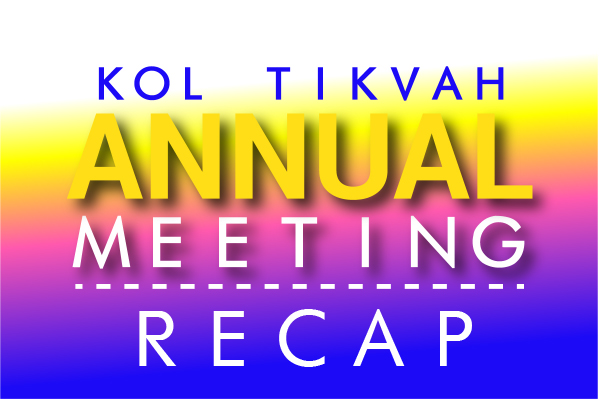 If you were not at our Annual Meeting — here is a recap:

2. Our bylaws were updated and adopted.  We thanked Jeffrey Light, Denise Levine, Ken Rubin and Jennifer Levin-Tavares, along with other members of the Bylaws Committee, for the many hours of toil associated with this long-needed project.

3. Our new Board was approved and installed, thanks to the hard work of the Nominating Committee headed by Gaby Mann.  Added to the general Board is Josh Miller.  Our Executive Committee is now made up of:
Andrew Rader-President
Alan Rosen-First Vice President
Craig Schneider-Second Vice President
David Hirsch-Treasurer
Douglas Melamed-Secretary.

In addition to the above, there were many other notable moments:

*Sisterhood and Brotherhood each gave sizable donations to the temple.  We thanked them for their contributions.

*It was announced that Larry and Nancy Schwartz will match donations for new siddurim.   We thanked them for their generosity.

*We gave grateful appreciation to outgoing members of the Board Geri Pomerantz and Bari Zahalsky.  We are forever indebted to them for their many years of dedication to the synagogue.

*Alan Rosen, our Treasurer (now 1st VP) told us in his Treasurer’s report that financially CKT is doing well.  That being said, there continues to be hard work to do as we continue to pay down the mortgage and prepare for unexpected emergencies such as the need for a new roof.

*We again thanked Sydney Berlin for her expertise in running our extremely successful ECC, and we also thanked Yael Hurwitz-Lange for the tireless work she has put forth improving our religious school and making it a safe and effective place for Jewish learning.

*We also shared our appreciation for the rest of our office staff, Deborah Rutter, Jill Ruddy, Merrie Dobrin, Meryl Bentman, and Nolan Soffer. Our teachers and maintenance staff deserve much gratitude.

*We again thanked our outgoing Executive Director, Jennifer Levin-Tavares, for the outstanding and unflagging work she has done on our behalf.  We wish her well as we begin searching for a new ED.  That Committee will be chaired by Nina Gordon.

It was an extremely successful and productive night and I thank everyone who made it possible, including the congregants who appeared to give us a quorum.  As we look ahead, I see CKT becoming only more exciting, inspiring and fulfilling of our promise of being a Kehila Kedosha.