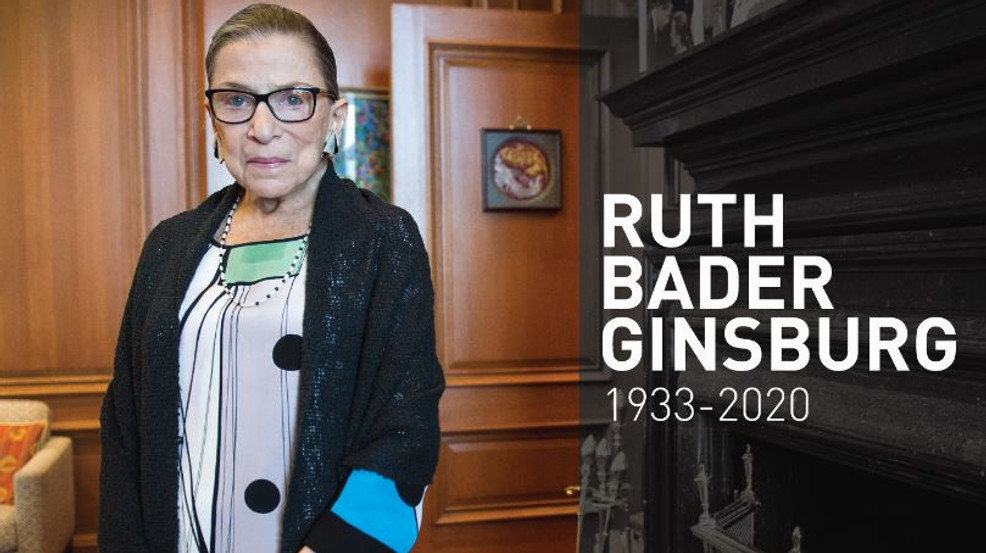 Our sages teach us that one who passes into Eternity on Shabbat is especially praiseworthy and considered as one of God’s Special Angels.  To enter the next world (Olam Haba) on Shabbat AND Rosh Hashanah, surely qualifies one to be considered among the greatest of our Tzadikim!

It is with great sadness that we mourn the passing of Supreme Court Justice Ruth Bader Ginsburg, who died on the Eve of the New Year 5781.  As Jews, we take particular pride in her vast achievements, but especially for staking her place in history as the first Jewish woman to be appointed to the U.S. Supreme Court.  Her list of accomplishments in her storied career helped shape the course of history in our nation for countless millions who otherwise would have been disenfranchised because of their gender, sexual orientation, race, or religious affiliation.  But Ruth was not just a giant among giants, and a Jewish heroine, a role model.  She was a woman of impeccable character.  Her honor, her integrity, her grace, her sense of humor, and most of all her humility and modesty are something I can attest to personally.

You see, I had the good fortune and privilege to meet Ruth not once, but twice over the last 25 years.  The last time I met her was at the White House during Chanukah in 2012.  But the first time I met Ruth was on the island of St. Thomas in 1996 when she visited our Jewish community there to celebrate the bicentennial of our historic synagogue.  I had the chance to dine with her twice and to hear her address our congregation on Shabbat and at the Governor’s Mansion on 2 separate occasions.  She spoke about how her Jewish heritage and especially Jewish texts inspired her to defend the rights of the oppressed and speak truth to power.  Because I know how much she loved the verse from Deuteronomy which requires us to pursue Justice, Tzedek Tzedek Tirdof, I presented her with a Tzedakah box (see picture) emphasizing how the word Tzedek, meaning justice, is integral to our understanding of performing acts of Tzedakah.  It was indeed a rare privilege to get to know this truly amazing human being and one that inspires me to this day to try to walk in her shoes.  Most of all, however, as the father of three daughters, I am forever grateful to Justice Bader Ginsburg for the doors she opened for women in this country and the opportunities for advancement that she fought so hard to achieve.

May the memory of this gentle giant, a true Jewish heroine, and Ashet Chayil, be a blessing forever and may her legacy live on in the hearts and minds of all who carry on her sacred calling – to be passionate foot soldiers in the pursuit of justice and righteousness.  This, and this only, is the best homage and tribute we can ever pay in her memory!

Zecher Tzadik L’vrachah!
May the memory of her righteousness be our blessing.